A lot of things we can do through this crazy time. Please read to make that world bearable. Covid19 is a lesson, and history is full of many lessons, but we never heed intentionally or unintentionally! Those are 100 books, so read and fathom well. 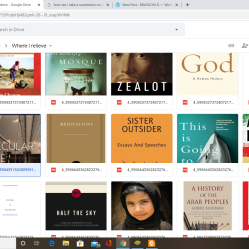 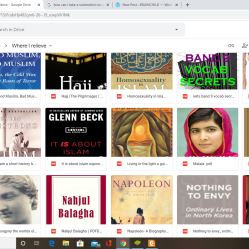 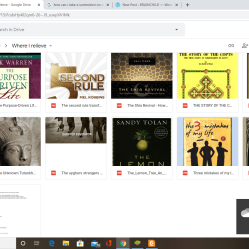 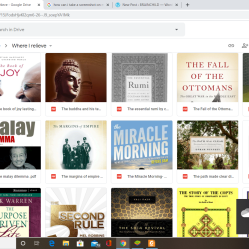 Romanticism and materialism are by-products of categorisation, conflicts, wars, order, races, etc. Greedy bellies have converted us into mere expats fleeing from that suffocating periphery. Living up to people’s expectations causes greed, whilst we grow expats because social norms insist on leaving us adrift. Human psyche is easily acquainted with, but still difficult to be redressed.

Accounts on Facebook, Instagram, Snapchat, Hellotalk,etc, are meant to be hearts’ food. Compliments and emoticons are tidbits would never make us full. To my way of thinking, relationships, especially, online ones are paintings relying on the painters. We are the painters who choose which one to show off, or dismiss, which is considered a masterpiece, or barely a scribble.

According to science, order is woven into the tapestry of life and it is something unchangeable as evolution occurs differently. However, religions have another standpoints that human beings are equal before Allah.

This Quranic verse was reportedly revealed when a group of prominent Makkans indicated that they wished to join the Prophet’s teaching circle, but were loathe to sit among and be associated with some of Muhammad’s other followers who were of low social standing (including Bilāl and other freed slaves) and so asked the Prophet to send them away.

Universal trust: with money as a go-between, any two people can cooperate on any project.

Human beings believe that money is the key overshadowing hearts. I am deep down sure that there is a relationship between money and that void in our lives. Accumulation of one side will definitely shrink the other one. Ironically I have none of them, but that void is unbearable!

Saudi women are finally allowed to travel on their own. In a place where relics and traditions overshadow religions and its essence. Before Islam, women were goods and chattels inherited after their master’s death. They were concubines, dispossessed, dependants,etc, until Islam came down. However, it sounds nomadic lifestyle outstrips even holy scriptures.

Can I travel alone with no mahram?

It is permissible for a woman to travel without a mahram “guardian” provided the way, destination, and return journey are safe and provided she does not meet with any harassments jeopardizing both her safety and religion. It has been narrated through Aidy Ibn Hatem that the prophet told him, “And if you live a long life, you will surely see women traveling from Hira till they circumambulate the Ka’ba, fearing no one except Allah“.

Imam Ahmed’s report of the hadith includes: ” By He in whose hands is my soul, verily Allah will bring this mattar (Islam) into completion till women travel from Hira and circumambulate the Ka’ba without being accompanied by anyone”. From this hadith with its different chains of narration, some scholars have derived the permissibility of a woman traveling alone if her safety is guaranteed. Moreover, they have used this hadith to restrict other prohibiting hadiths which, according to them, referred to the lack of security associated with travel in the distant past.

The majority of scholars have permitted a woman to travel for obligatory hajj without a mahram if accompanied by trustworthy females or company. They based their opinion on the precedence of the Mothers of Believers (may Allah be pleased with them) who went on hajj after the prophet’s death and the caliphate of Umar was accompanied by Uthman Bin Affan.

Allah create us different to know each other and witness his phenomenal creation on earth. I am so glad and looking forward to hearing more pleasant news about Saudis and others!

Definitions belong only to the definer, not the defined.

every society accumulated layer upon layer of cultural ideas and norms that have little to do with biology. Societies associate a host of attributes with masculinity and femininity that, for the most part, lack a firm biological basis!

In a larger space, for example in North Korea, the sexes become segregated. At mealtime, the women huddle together over a low wooden table near the kitchen, eating cornmeal, which was cheaper and less nutritious than rice, the preferred staple of North Koreans. The father and son eat rice at their own table.

At the time, girls are not supposed to ride bicycles. There is a social stigma. People think it unsightly and sexually suggestive, and periodically the Workers’ Party have issued formal edicts, making it technically illegal.Therefore, if a girl rode a bicycle, men would try to pass her on their bicycles, cursing her for her audacity.
“You’re going to tear your cunt,” they would scream at her. Ironically, North Korea is not a religious country, but it is as abhorrent as the Arab world.

Ostensibly, objectification turns us, as women, into a burden which prompts the society to get rid of even if the ring will turn into handcuffs!

Without marriage, the rhythm of your life will get cacophonous. However, marriage is a contract which is based on mutual consent between a man and a woman to fulfil their sexual needs and support each other. There are neither slaves nor masters. It is an equation of caretaker with woman’s resourcefulness.

The picture shows what was prohibited for women in the medieval history because of culture and only culture! We still have miles of illumination to go before we sleep.

Thanks for every figure who taught us the importance of self-aggrandizing. The importance of dwelling in our cocoons until we get acquainted our real selves. Thanks for not clipping wings, letting us wander, and thrust between your relic “yesterday” and our future. Thanks for the slaps, ridiculing our entitlement, and your timing to get things done. Without savouring these, I would never have such familiarity with my new self. Obstacles are made for those who are incapable of keeping pace with the present. I am still fetching, wandering, but deep down satisfied with what I have done and still. Allah honoured me to instill, and give a hand to those who are less privileged than me. Therefore, do not ever question my entitlement as a woman. I can be your unwavering comrade and your warmest figure according to the situation. You choose which one to be by your side. Do not believe in the surface as it is a protection against beasts.